Who are we?
Africa-PPB EXPO is an international exhibition for plastic, rubber, petrochemicals and building. The exhibition has been created to promote African unity through strengthening trade relations between African nations as well as putting all African markets on the map.

Signing of MOU with Kenya’s Rift Valley Railways
Taking place in Sharm El Sheikh, under the High Patronage of H.E. Abdel-Fattah El-Sisi, President of the Arab Republic of Egypt and the umbrella of the African Union and COMESA is the Business for Africa Forum 2016.
Africa- PPB EXPO signed a MoU with Rift Valley Railways (Kenya) Limited (RVR) in a press conference within the forum, a tangible step to African cooperation. Top attendees include H.E. Ashraf Salman, Minister of Investment, Egypt;Tarek Kabil, Ministry of Industry and H.E. Ambassador Mona Omar, former Assistant Foreign Minister for African Affairs. Internally, RVR will provide logistical services, as the official land transporter for the exhibition in Tanzania.

Networking for Launch of Exhibition in Tanzania
A networking session for key stakeholders of the upcoming Africa-PPB EXPO 2016 International Exhibition took place in the Grand Ramada Hotel, Dar Ess Salam on 22-23rd January 2016. Tanzania Private Sector Foundation (TPSF), and Tanzania Trade Development Authority (TanTrade) are key representatives from the public and private sectors who attended the session. Aramex, the exhibition’s logistical partner, playing a prominent function in providing all the logistics and transportation services needed to allocate to Tanzania was also present in the session, representatively.

The theme of the networking session was to bring together important stakeholders who will contribute to the successful staging of the exhibition that is the first of its kind. The session aimed at highlighting the significance of each of the stakeholder’s roles in the positive coordination and organization of the event. 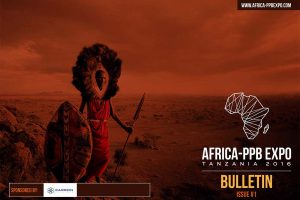 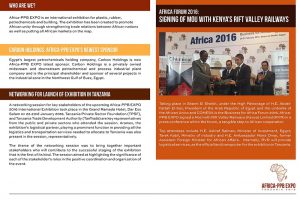